Since I first heard about Pink Zebra I’ve wanted it, which isn’t surprising seeing as I’m such a wax junkie. Plus it’s like three of my favourite things in one…pink, animal print and wax, as if it was all just designed for me.

Sprinkles are made in America using premium Soft Soy® wax and high-quality fragrance oils, which are blended together at super concentrated levels to deliver up to 50% more fragrance than average candles. They are designed to give you home fragrance variety at an affordable price, Sprinkles allow you to decide what you want, how much impact you want, and when you want it.

Sadly though Pink Zebra isn’t available in Europe but luckily I was contacted by the super nice Irene who’s a Pink Zebra Independent Consultant and I finally got me some Pink Zebra! Although now poor Irene is stuck with me forever because I’m obsessed.

So what did I buy?

Cherry Pie – Sheer delight of cherries bursting with deliciousness in buttery pastry crust – it’s the perfect cherry pie!
Smells exactly like a cherry pie right from the oven, you can actually smell the buttery crust. It’s tart yet creamy and so comforting. Also makes me quite hungry.

Grape Popsicle – A frosty, frozen, juicy grape popsicle mess.
This is what my childhood smelled like. I lived in Canada for about six years when I was a kid and lets just say for those six years my tongue was purple from everything grape – grape soda, grape popsicles and freezies, grape juice and whatever else was available hee hee. So when I was picking my scents there was no doubt that I would pick Grape Popsicle and I’m so happy I did.

Root Beer Barrel – Get nostalgic with the spiced sassafras of a favourite old-timey candy.
Root Beer was another treat I loved from Canada and I’ve had Root Beer candles before that have smelled amazing so that’s why I chose Root Beer Barrel. It’s super strong on a cold smell and I was right to assume that you don’t need much of these sprinkles at all to get a long lasting and intense scent; I only used about half a scoop each time. I’d love to mix it with vanilla to make a Root Beer Float type scent.

Spiced Vanilla – A decadent cream cheese icing and cinnamon blend.
I opted for Spiced Vanilla because well vanilla and cinnamon are two of my favourite scents and also because I wanted something somewhat neutral and mixable. We have two warmers in our living room because it’s quite large and open planned and I like to have them going at the same time, sometimes with the same scent in each, sometimes not, I think Vanilla Spice will go perfectly with a lot of the melts and tarts that I have. 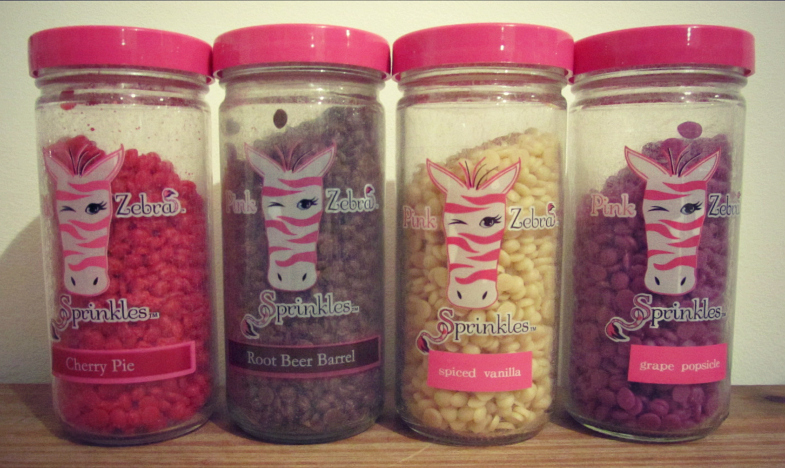 .
The first scent I tried was Grape Popsicle and man oh man is it insane! I put one of the little scoops that Pink Zebra give you for your sprinkles in each of my warmers and they lasted easily about five days and for the few hours that they weren’t melting the scent still filled the room.  I already want to order like four more bottles of Grape Popsicle just in case I run out.
The other scents I loved too, although it took me practically forever to try them all because they just last so long. I can’t wait to try more amazing Pink Zebra Sprinkles.

Overall, I’m so impressed with this brand, Pink Zebra has by far exceeded my expectations. They so need to go international like ASAP, with such a huge variety of scents that last a heck of a lot longer than some other brands, they’re totally missing out by not going global.

Have you tried Pink Zebra before? Thoughts? Recommendations? If you haven’t you should chat to Irene, girl knows her stuff! Follow Irene on Instagram, HERE and show her some love on Facebook, HERE.

Stay tuned for more features and reviews from us here at Vanilla&Lime.