Did everyone have a wonderful October? Halloween has to be my favourite holiday, I love how fun it is and ALL the candy!

I had a bit of an accident last week, I’m ok now but it set me back on a lot of things, like work and blogging. Anyway, here are my October favourites. I had so many that is was hard to narrow it down to ten. 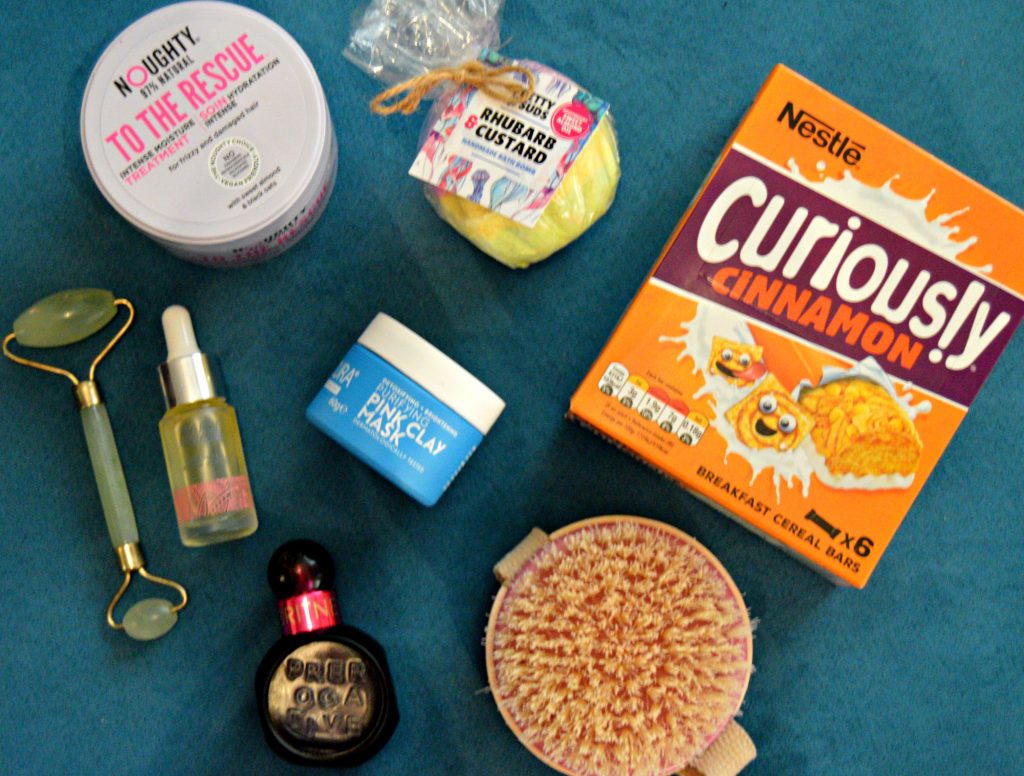 Noughty To The Rescue Intense Moisture Hair Treatment – I’ve talked about my crazy scalp before and I’ve gotten a handle on it this year, finally, but it’s meant that I haven’t been able to use regular conditioners or hair masks. I’ve been using the Noughty Leave In Conditioner which I love and when I was purchasing more I decided to take a risk and purchase their Intense Moisture Hair Treatment and I’m so glad I did. It’s 97% natural and I haven’t had a reaction to it, which I’m ever so grateful for.  I’ve been using it once or twice a week on my super thick, dry, damaged hair and it’s done wonders for it.

Pretty Suds Bath Bombs – I did a Boots haul recently mainly for Christmas presents and some essentials, and I decided to treat myself to some bath bombs. Pretty Suds bath bombs were 3 for 2 on offer so I picked up a few. These are made with sweet almond oil so they make your skin feel lovely and soft. I’m definitely going to buy some more, especially for Christmas presents.

Curiously Cinnamon Cereal Bars – Curiously Cinnamon (which for our readers across the Atlantic is basically Cinnamon Toast Crunch) is my all time favourite cereal, so when I saw these cereal bars in my local bargain store, I STOCKED UP! I’ve been enjoying them as an evening treat with a mug of my favourite chai tea, it’s the perfect autumnal snack.

Rio Rosa Mosqueta Rosehip Seed Oil – Full disclosure, I bought this oil purely to get a free jade roller, it was a special offer that Rio Rosa Mosqueta had on in September, but honestly it has become one of my most used skincare products over the past two months. I like to use this most at night time, I apply a decent amount and then use my jade roller, my skin feels so soft and supple in the morning. I’ve also used this in place of my regular moisturiser, I just use less than I would at night time.

Jade Roller – I’d been wanting a jade roller for a while and when I saw that Rio Rosa Mosqueta had the offer on that I mentioned above I immediately got one.
Jade rollers are really good for puffiness and redness, the jade stone is cool to the touch, which can be soothing on the skin. I find it great to use on my under eyes especially after a late night working or partying.
I really like to use mine at night time to help work my oils deeper into my skin, it’s become a nice soothing ritual for me before bed.

Lacura Purifying Pink Clay Mask – Aldi released this last month and it is apparently a dupe for the Sand & Sky Pink Clay Mask, which is really popular but I’ve never tried it before so can’t compare the two. I bought this as I love clay masks, especially on my nose / t-zone area. When I first tried it I was amazed at how quickly it dried, which is great if you’re in a hurry or don’t have time for a full pampering session. I left it on for about ten minutes and then rinsed it off with a warm wash cloth, I was shocked how well it cleaned my pores, better than any other clay mask I’ve tried and that’s been a lot! If you’re in Aldi sometime soon pick up one of these great beauty bargain buys.

Prerogative Eau De Parfum By Britney Spears – Y’all know we LOVE our Britney perfumes, so when Prerogative, her first unisex fragrance, was announced we both knew we’d be buying it.
I have the majority of Britney’s perfumes, and I always thought the original Fantasy was my favourite but I think I prefer Prerogative. It’s a sweet, warm, spicy scent and ever so sexy, the notes of sandalwood, pink pepper and apricot really stand out for me.

EcoTools Body Brush – My skin has been particularly dry at the moment mainly due to the cold weather, and my dreaded keratosis pilaris on my upper arms wreaks havoc this time of year! So I was excited to give this body brush a go and see if it could help give my skin more of a smoother appearance.
I’ve been using it every time I have a shower or bath for a real thorough exfoliation and I’ve definitely noticed a difference in the texture of my skin. It’s a lot smoother and I also found my body creams sink into my skin a lot faster after using this too.

Chilling Adventures Of Sabrina – I grew up reading the Sabrina comics as well as watching Sabrina The Teenage Witch, and loving all things witch related, which I still do, so I was very excited when the supernatural horror television series based on the comic book was announced and knew it’d be something I’d watch as soon as it was released. I won’t give too much away, but it’s so good! You gotta like horror stuff though, as stuff gets very dark, very quick.

Derren Brown: Sacrifice – Myself and my hubby are fans of Derren Brown and although we hadn’t heard about this new special we ended up watching it the night it was released on Netflix. In it, Derren Brown concocts a psychological experiment in which he tries to manipulate an ordinary person into taking a bullet for a stranger. I don’t think I’ve cried so much ever during a TV show, and I watch This Is Us regularly. I really think there’s a lot of people in the world who NEED to watch this, it has such an important message and was so powerful.

Let us know what your October favourites were in a comment below. Stay tuned for more product features and reviews.