I squealed with such happiness when I saw that our dear friends at Shining Sol had sent me a Bomb Pop scented candle to review. I’ve mentioned before that I lived in Canada as a child, and one of my greatest joys was popsicles, in particular grape ones and Bomb Pops which I think were called Rockets in Canada. I can still remember the taste of the cherry, lime and blue raspberry popsicles on crazy hot summer days. 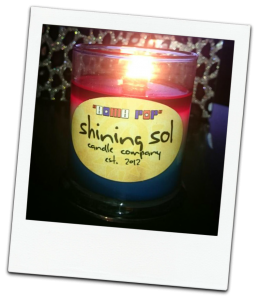 fragrance, Bomb Pop has one of the brightest, almost sort of fizzy cherry scents that I’ve ever smelled, it really packed a punch!

As the candle burned down to the lime fragrance, the lime mixed with the cherry and created a whole new, nose tingling fragrance. The lime really made the scent pop.

I was so excited for the blue raspberry fragrance to come through and when it did it really captured the aroma of ripened raspberries, sugary sweetness and it had a sort of effervescence to it.

We’ve mentioned before how much we love candles with wood wicks, but it’s just so crazy how different they all are and how different they all sound. I think Shining Sol’s wood wick is the quietest one I’ve ever had and I’ve tried a lot of them. I’m not complaining at all, I LOVE that it’s quiet, some of them can be annoyingly loud and if you’re not in the mood for the relaxing sound they can be sort of irritating. 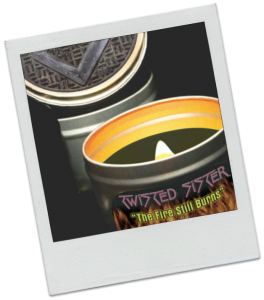 I love that Shining Sol’s combination of soy wax and their wood wicks make for such a long lasting candle and I think I only needed to trim the wick twice maybe three times.

If you haven’t tried Shining Sol yet, then you’re missing out. They have so many great and unique scents, plus check out their NEW officially licensed Twisted Sister Candle; The Fire Still Burns celebrates 40 years of Twisted Sister history. Rock on!